Apollo came into rescue with his brother, Zeus.  Both 1 1/2 years old and outdoor dogs with little socialization or training.  His brother was heartworm positive, as well as a far more dominant personality, so they were fostered separately to help them both blossom and to meet their individual needs.  Apollo was a little shy at first, but once he came out of the shadow of his brother, his own personalty began to emerge.  He became a very social, playful, curious, smart and affectionate pup!

While in foster care, Apollo had to learn the ropes of living indoors, walking on a leash and using the doggie door, all of which he mastered!  Things like cuddling with people and sleeping in the big bedroom at night came very naturally!!  Apollo was adopted, renamed Fred by his new family, and moved to Virginia to grow up with a human boy and a family of his own! 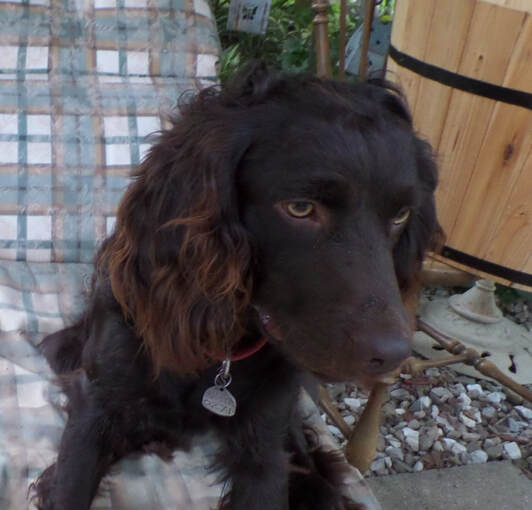 Thank you so much for the card for Fred’s (Apollo’s) Gotcha Day! He has been a fantastic addition to our family, he loves to play ball and lounge around. Fred is always available for a hug or belly rub, and is enthusiastic about everything! We love him! I am attaching some pictures of Fred with his back to school glasses, his Halloween costume, his snow play with our son, and of course a Boykin sprawl pic.