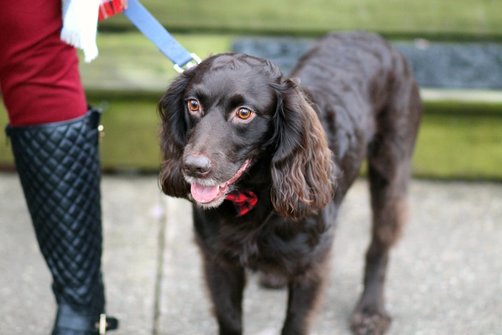 As cliché as it might be, the truth of our success story is that I did not rescue Piper, but rather he rescued me.

I didn't grow up in a family with dogs other than those my grandfather kept in an outdoor pen and used to hunt with. They were unbearably loud the majority of the time, and to be honest, usually scared me half to death. However, after struggling with medical issues that led me to the loss of much of my independence, including the ability to drive, I somehow began longing for the comfort and companionship of a dog. My life was in utter disarray, with a dark sadness that always seemed to be present, and I knew I needed something to bring about a change.

In walks Piper. I knew I loved him the first time he looked at me with his sweet amber eyes. Piper, who was formerly Pepper, was a 4 year old gentleman who had been surrendered by his elderly owner when her husband passed away. He was full of life, and mischief, to say the very least, and was in need of a good home. I was filled with joy when Eric Grubbs called to give me the news that Piper would soon become mine.

I had no doubt that I would love this sweet boy, but had no idea just how much. We settled into life together seamlessly. He quickly became my shadow, following me wherever I went. And it was within a small amount of time that the darkness that had been surrounding me began to fade away. My medical issues began to come under control, and I was gaining my independence back. I came home to a smiling face and wagging tail waiting to greet me every evening, and a personal space heater at the foot of my bed every night. Life was good, and getting even better by the day.

Piper is now a healthy 7 year old gentleman. His chin is speckled with gray and he still has eyes that would make any girl(kin) swoon. He plays fetch like it's his job and has an affinity for summer trips to Florida to see his grandparents, complete with tractor rides with grandpa. He dreams of being an old farm dog and loves running in the open fields chasing anything that comes into sight. More than anything though, there is no doubt at all that he loves his Momma. And this Momma is beyond grateful for her little brown dog, Piper, and the joy he continues to bring to her life. ​