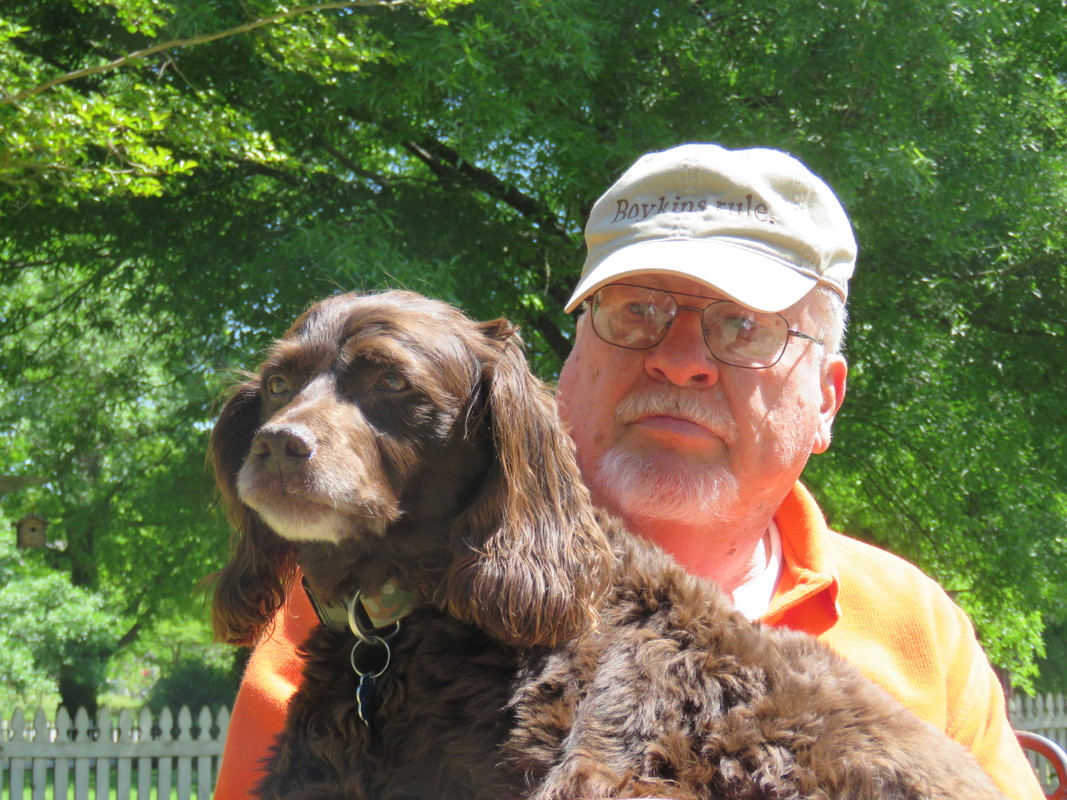 Terrance was spotted on a shelter site from central Georgia, and BSR swung into action to pull him.  The transport was one of BSR's more memorable ones, with a single driver taking one dog to north Florida, then picking up Terrance and driving him to the VA line, then back home to Charleston.  Terrance had apparently come from a situation with an elderly owner and had had very little training or socialization, and he was something of a wild child when he got to his foster.  After getting his health issues in order,  housetraining and manners were addressed.  Finally, Terrance became something of a gentleman, and was adopted.  His adopter picks up the story:

We decided to go rescue vs. puppy 2 years ago when we turned 70.  We were familiar with BSR since several friends go to SEWE and bring me back caps, etc.  We completed our adoption application and were approved in early 2016. We applied for 'Terrence" who was being fostered by Karen Holt in eastern Maryland. "Terrence" had come from a shelter and had just had surgery for some benign masses on his back, and had to re-learn how to be a family dog.  The trip to Karen's took 4 volunteers on tag team. All of this made us grateful for how BSR takes care of Boykins, which we have had for many years.  We spend August in Maine, where I grew up, so arranged with Karen to pick him up en route to our place there.  Karen probably chose us for "Terrance" over others because we are retired and have a large fenced yard, so could keep him contained and be with him all the time.  We renamed him Spike, so he's now SpikeR (the R is for our last name), and when we got home, the dog bonded with me in only 2 weeks. He had some blood issues and stayed with the vet for a few days. He took about a year to get back to his optimum weight and looks to me for direction at every turn. He has become very affectionate and accepts my wife also.  He is a wanderer, looks longingly between the pickets, so figure that trait got him lost. What a great dog!!!!.

'Spiker does Northeast Railroads'...  in august, Spiker took a trip up East in hopes of catching a train ride or two. First stop was Steamtown National Park.  As with most Federal facilities, they were not dog friendly, so he was the greeter with his mom at the entrance door, while papa rode the train. Everyone liked the friendly brown dog, even tho few knew what breed he was. Next day was Bellows falls where not much was going on, so he merely marked the territory well. Then White River Jct, where the train had just left. Next day was Conway Scenic, where they were happy to let him ride the Valley Train, no charge. We had a spare seat so Spiker sat like a gentleman the whole way. Next day in Maine he hit the Narrow Gauge in Portland and the WW&F near Wiscasset, where we knew Spiker was not welcome, but the littler trains suited him fine.    ​